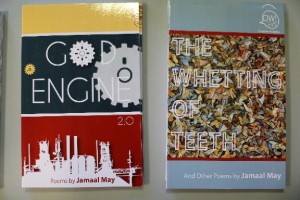 On Tuesday, October 1st, poet Jamaal May read his works and had an informal discussion about writing with students and faculty in the Lee Reception Room. Those attending got to see firsthand why Jamaal May is a three-time Rustbelt Regional Slam champion.

May read his poems in order of intuition. In other words, he would read a poem, and when he was finished, he looked out at the audience to judge what to read next. He moved the crowd like he was conducting a symphony. He started with his poems on fear, and the crowd felt the emotion and power in his words. His poetry on fear ranged from the everyday, such as the fear of needles and the fear of waiting, to the more serious – he called America a nation with post traumatic stress disorder. His works hit a range of emotions for the audience that included anger, love, sorrow, pain, and humor.

After the reading, May opened the forum for questions. He discussed his entry into the slam poetry world, stating that his sister believed he was a poet before he did. He also addressed the difficulties he encounters when writing poems made to be both read and heard. Finally, he expressed his thoughts on the past, present, and future of poetry as a genre in America. An attendee David Phillips said, “I really liked how Jamaal explained that poetry argues for connectivity. And, that this connectedness destroys the power of disconnection that some people use to justify their hurtful actions against others.”

This entry was posted in Events and tagged Jamaal May, Poetry, slam. Bookmark the permalink.
Skip to toolbar