As part of the Library of Congress National Book Festival, author Don DeLillo visited Washington D.C. DeLillo is one of America’s most acclaimed writers. The author of 15 books, including Mao II, Underworld and White Noise, DeLillo has won countless awards, including the National Book Award. As part of the book festival, DeLillo became the first recipient of the Library of Congress Prize for American Fiction.

During the sit-down, DeLillo discussed his life as a writer, including how his career began, noting that he did not initially see himself as a writer; rather, he drifted around for several years after college before beginning his first novel. The students were also able to ask questions, which gave insight into many diverse topics such as his use of Asian religions in his writing. DeLillo also elicited laughs when he mentioned that when he spends time with his writer friends, they do not discuss their books! DeLillo divulged that he continues to write, and is working on a novel now. 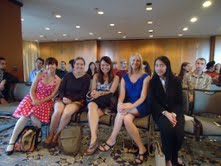 This entry was posted in Events, Students. Bookmark the permalink.
Skip to toolbar