Our sentimental Mr.Yorick travels across France, all the way from North to South, gathering random little stories on the way, having relationships with different girls. 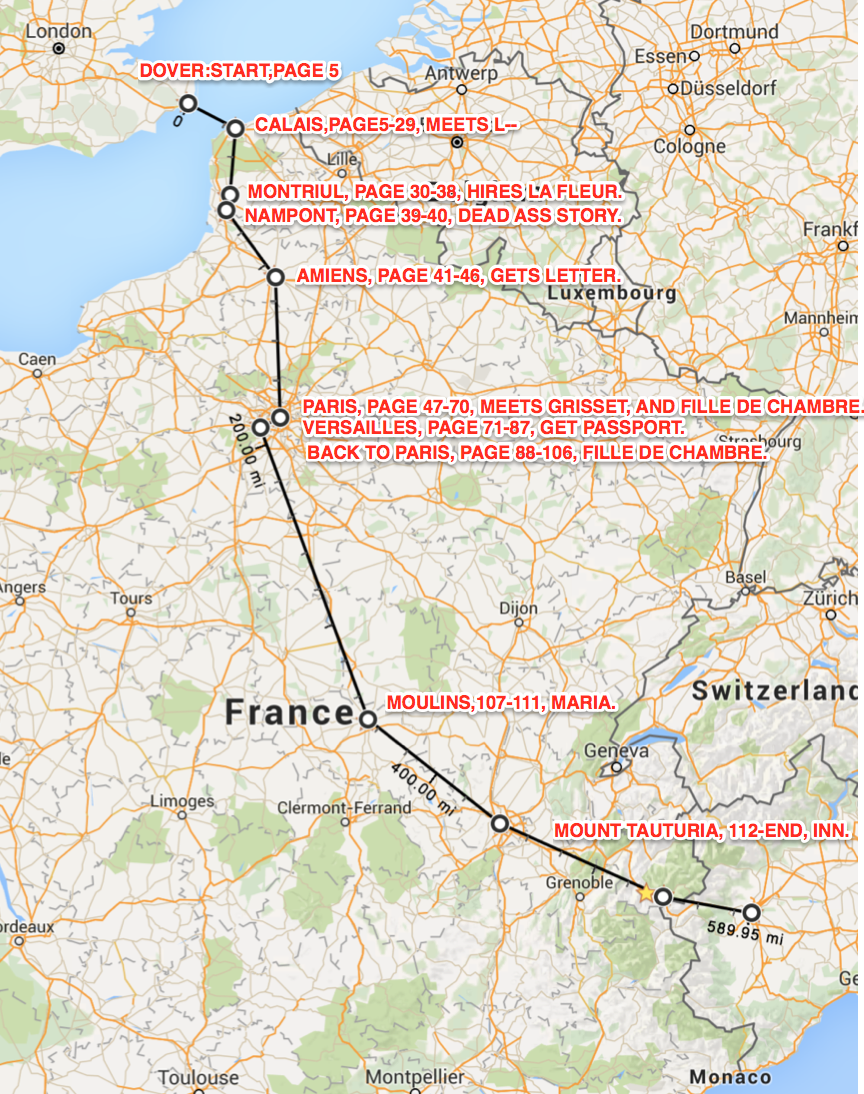 So where is the sentimental anyway? It seems like, in most of the situation, Yorick is rather not sentimental, or let’s say he is somehow very reasonable. He mentioned the difference in the book: Luke-warm hearts/ Clay-cold heads. And it seems like his luke-warm hearts only secretly functions when he’s talking to a female, an attractive female.

“Yes, – and then -. Ye whose clay-cold heads and luke-warm hearts can argue down or mask your passions, tell me, what trespass is it that man should have them?”（90）

I figure he is in completely two different status when he talks to different gender: When Yorick speaks to male, he gets very reasonable, straight forward and confidence, or let’s just say he acts very normal.

“I’ve taken your lodgings for a month, and I’ll not quit them a day before the time…” (69)

Not only here, but he was also very active and confident when he went to get his passport. Even it’s a cold visit, he successfully got a passport from a man he doesn’t know at all, and he didn’t get very nervous or uncomfortable about the misunderstood, his funny title did not bother him.

But he acts not that natural when he’s with a female. Whenever he talks to a woman, lots of thoughts were told to the reader, but not spoken by Yorick, the “sentimental” thoughts turn out the be more proper words when it comes out of his mouth, for instance, he hid his thoughts here:
“I was just going to cry out, Then I will write it, fair girl! upon thy lips. -If I do, said I, I shall perish; ”（89）

When he’s with a female, his sentimental thoughts were contained by reason. The story seems very partial to him: He always gets to exist in a context that he was put together with a female, and the female is rather actively towards him, it is almost like the female has heard what his thoughts and answering him.

“so that Monsieur Dessein left us together with her hand in mine,”（16）
“I am sure you must have one of the best pulses of any woman in the world. – Feel it, said she, holding out her arm.”（53）

He only lets the voice of reason come out; his sentimental feelings to female were mostly kept by himself. (Except for Eliza, he doesn’t hide his feelings for Eliza at all.) Perhaps the author is suggesting a balance between sentimental and reason?

6 thoughts on “Sentimental Covered by Reason”