I was trying to read this book in the past week, English is my second language, so it is naturally my first time to know this book. I was easily confused with the numbers of everything, to make myself more clear about the story; I have made a chart to show some trackable data in the story. 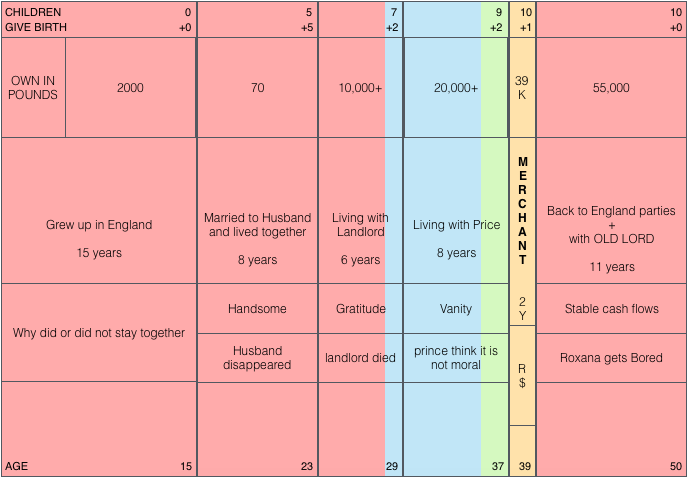 About how much money does Roxana own in various period of her life, all interests are calculated as 10% of the property and shown as property in the chart, we can see after her fist failure marriage, every single relationship brings her more fortune:

2.“other than about seventy pounds in money, and what few things of value I had about me”(39)

3.“I had now no poverty attending me; on the contrary, I was mistress of ten thousand pounds before the prince did anything for me.”(151)

4.“I had no need to give him twenty thousand pounds to marry me, which had been buying my lodging too dear a great deal.”(313)

“In a word, I had now five-and-thirty thousand pounds estate; and as I found ways to live without wasting either principal or interest, I laid up £2000 every year at least out of the mere interest, adding it to the principal, and thus I went on.”(392)

But it doesn’t mean she goes wrong ever since her husband left, the fortune from the landlord’s death was not her design, and she was still keeping a relatively high moral standard before that.

The most interesting part I found is that there is a swift change in Roxana’s moral principle at a particular point, before or after she went to France with the landlord, and I think something special must have happened at that period. The way she decides about relationships were opposite before and after that point, it seems like she just suddenly decided to “turn black” at that moment? Perhaps it is because the death of her “friend” landlord, or perhaps it is because she saw her husband again? I will keep researching on this topic and post more details with reference next week.

3 thoughts on “Dig into the data of Roxana”