Attend any of the events below and write up elements of the event that tie to themes, cinema analysis terms, or issues that we’ve discussed in class for up to 5 extra credit participation points. Your response should be 2-3 pages (500-700 words), and should be structured with a formal sense of introduction, body & conclusion. After each event, I’ve given some possible points of discussion or analysis.

New options for online course: Select any movie to view that is an adaptation of book to film and has won awards for directing, cinematography, acting, screenwriting, or editing and choose a clip to analyze using Giannetti’s mis en scene terms. Write a response paper using your analysis that includes an attached or embedded image from the film.

AFI Movie Club a family-friendly, movie themed activity.
From their website: In this time when we are reminded “There’s no place like home,” AFI has created a global, virtual gathering of those who love the movies. Each day’s film – announced by a special guest – is accompanied by fun facts, family-friendly discussion points and material from the AFI Archive to enrich your viewing experience.
Watch one of their screenings and write up and extra credit response.

Over Spring Break: watch the film Wendy, an adaptation of Peter Pan. Reflect on this re-telling based on your other encounters with this cultural icon. Jot some notes down before and after the film: what do you first think about when you think of Peter Pan? Describe the values of this story, or the main characters. Then go see the film and after, write again about how your perceptions may be changed by the film.

Feb 25, 2-3:30 Lee Reception/Barry Gallery. Department of Literature & Languages faculty Dr. Holly Karapetkova will be giving a Works in Progress talk focusing on poetry of witness. All are welcome to attend! This event will be recorded for airing on Delmarva Public Radio.  Perspeolis is a memoir of witness-do you see connections between Satrapi’s narrative and those Dr. Karapetkova discusses?  Take notes about connections, and then reflect on moment you find powerful, different,  or. just interesting.
Feb 28, 8pm Bernie’s African American History Month read-in at Bernie’s. Bring a quote, short story, or poem you’d like to share with others. Books and snacks will be available for all. Want to read or be more involved? Email Karina at kguzman@marymount.edu. If you perform/read your work, I will ask you to submit only a 250 word reflection on how spoken or performed language communicates differently to you than filmed performance, and you’ll automatically get the full 5 points of extra credit! Put yourself out there! 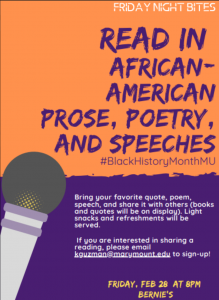 Anytime: National Portrait Gallery, Gallery Place Metro (free) 3rd floor. Find David Hockney’s “Snails Space with Vari-Lites, “Painting as Performance” (1995-96) and talk about in what sense it is “visual performance.” There are a number of other exhibits that show visual art as performance as well, and that blur the boundary between film/cinema and life. Take a photo of any of them and either analyze them using some of Gianetti’s visual terms as visual art, or in terms of their use of acting or editing.
Coming in April, Music Man Singalong in Reinsch Auditorium. Date and time, TBA.

Ethics Week, MU Film Fest, Feb. 10-14th.
Friday, Feb 14 from 10-5pm, Gailhac G115
Screenings of The Mission and And the Band Played On. The Mission will be screened during class time, but come to any screening session or discussion panel and write a response paper for Extra Credit. Extra credit offered if you attend any Ethics Week event and make a connection to class.

Possible writing prompt questions for live events//speakers: How did the panel discussion affect your viewing or understanding of the topic presented? How does live discussion differ from film a cultural or communal art vs. a private, individual art? If you were to adapt a story from one of these events ont film, how would you do it?

MU Film Fest: “We Are All Connected”
Migration, Compassion, and Cultural Encounter on Film–Then and Now
As part of a celebration of Marymount’s 70th birthday, MU Film Fest is encouraging the community to use film to talk about the legacy of Catholic compassion for families and people in the process of migration. Look for “pop up” films in your courses and on campus throughout the semester.

10-12:30pm The Mission (1984) Dir. Roland Joffé, Starring Robert DeNiro, Jeremy Irons, Aidan Quinn, Liam Neeson.
This Oscar-winning film depicts the tension between European Jesuits who travelled to South America to bring Christianity to the newly colonised inhabitants and their threat to the slave trade of Spanish and Portuguese empires. Questions to consider: acting styles of DeNiro, Irons, Quinn & Neeson (using Braudy or Giannetti); use of film as a public forum of education or entertainment; adaptation of Jesuit records into narrative form, how films about prior histories engage with current audiences.

3:00-5:00pm And the Band Played On (1993) Dir. Robert Spottiswoode
This adaptation of Randy Shilts’ journalistic studies the early days of the CDC’s research into the international outbreak of a virus that would be named AIDS. The film touches on issues of international immigration, medical research, and the intersection of politics, disease and migration. In 1981, epidemiologist Don Francis (Matthew Modine) learns of an increased rate of death among gay men in urban areas. The startling information leads him to begin investigating the outbreak, which is ultimately identified as AIDS. His journey finds mostly opposition from politicians and doctors as people continue dying at an ever-increasing pace. Questions to consider: how film becomes a record of history, film as a tool of public engagement and public record; acting style of Matthew Modine or other “star” or “personality” actors, how films about prior histories engage with current audiences.
OR You might analyze a scene from either film using Giannetti’s points of mise en scene analysis, or talk about the work relative to its acting style, its genre, or director-as-auteur.

Feb 19, 12-1:30, Caruthers Octagon Attend the student poetry reading, and consider how poetry is a form of visual performance. Got some creative work of your own? Submit a creative work to BlueInk, our student creative journal–photography, graphic arts, and poetry are all welcome.
National Portrait Gallery, Gallery Place Metro (free) 3rd floor. Find David Hockney’s “Snails Space with Vari-Lites, “Painting as Performance” (1995-96) and talk about in what sense it is “visual performance.” There are a number of other exhibits that show visual art as performance as well, and that blur the boundary between film/cinema and life. Take a photo of any of them and either analyze them using some of Gianetti’s visual terms as visual art, or in terms of their use of acting or editing.
4.) Coming in April, Music Man Singalong in Reinsch Auditorium. Date and time, TBA.