The fifth chapter of Alice in Wonderland, Advice from a Caterpillar, introduces Alice to a wise insect. Alice comes upon a mushroom and sitting on it is a caterpillar smoking hookah. The caterpillar questions Alice and she confesses her current identity crisis, compounded by her inability to remember a poem. In an attempt to analyze this passage by using a digital humanities method, I created a word cloud using a tool provided by Voyant. The world cloud generated a visual analysis of this passage. The words in the original text are strategically prepared and weighted according to the number of occurrences in the text. 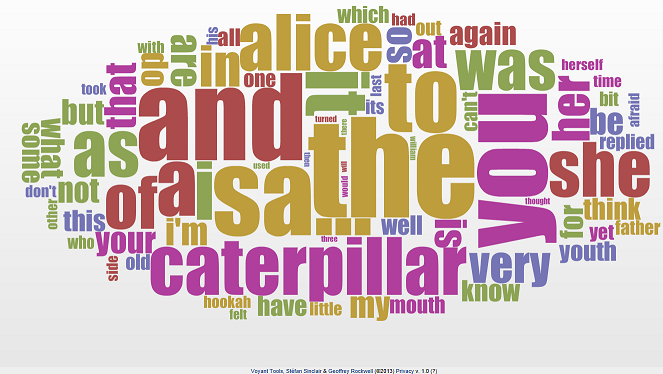 At a glance, the word that is graphically represented as the largest and consequently appears most in the text is the word “the”. The word that is graphically represented as the smallest and thus appears the least in the text is the word “replied”. These two words although not extremely significant key words to this passage like William, Alice or caterpillar, are important to the analysis of this passage. Lewis Carroll, author of the popular novel, makes excessive use of the word “the” when speaking of the caterpillar. The caterpillar does not have a name; as a result Carroll cannot address him as caterpillar but as the caterpillar. The word replied is least used because Carroll uses dialogue when illustrating a conversation versus a he said, she said, he replied, or she replied approach.

In an attempt to filter out words that I felt were less important or significant I used Voyant’s Taporware tool to adjust my word cloud to themes and words I thought were more noteworthy. As a result, a second word cloud was generated. 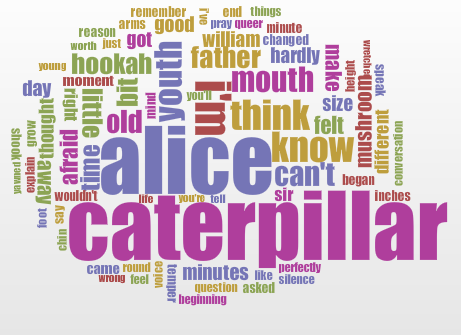 After filtering out a few words, I think the second word cloud is a better representation of the advice from a caterpillar passage. This word cloud allows the reader to focus their attention on the larger words illustrated: Alice, Caterpillar and youth allowing for an enhanced illustration of the themes and key words of this passage. In this customized word cloud the word “caterpillar” is the largest, occurring 24 times in the text. Coming in second place, the name “Alice” appears 22 times.

Upon analyzing the word cloud and exploring other tools on Voyant I discovered that the word trend graph best illustrates the exchange in conversation regarding the advice the caterpillar is instilling upon Alice.

While the word trend graph allows to clearly see the exchange in conversation, the word cloud allows us to visually analyze themes and key words.  The word “caterpillar”,  suggests a theme of evolution or transformation. This is particularly evident for Alice because it exemplifies Alice’s quest to find herself taking on advice from the caterpillar.Words such as “youth”, “minute”, “life”, “youth”, “old”, and “beginning” suggest a theme of a self-journey to find one’s self. Words like “inches”, “mushroom”, “height”, “little”, “grow”, and “size” illustrate the caterpillars instructions for Alice to eat in certain ways to grow or shrink in any given situation. The words “father” and “William” appear fairly small suggesting that they are not words that are often repeated in the text. While this is a true statement, these two words encompass a deeper meaning to the chapter being analyzed. By simply seeing these two words on the cloud it is not evident that in this passage the poem “Father William” is used as a tool to trigger Alice’s memory.

After experimenting with a word cloud as a method of analysis it is not until after the word cloud has been customized to our own liking that it will make sense to us. From the first word cloud created it wasn’t clear what the centralized theme of the passage was. It wasn’t until I filtered out a few words that the theme and key words were more apparent. However, the word cloud does not necessarily provide a close reading of the passage. It allows only for a visual to be explored for further analysis. Thus, in any case I don’t think it’s an accurate means to analyze a story by its word cloud.