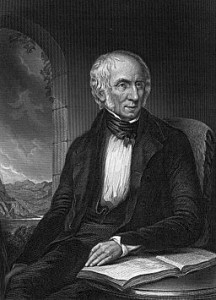 The title of this poem reflects the resolution and independence of an old man encountered by the narrator as well as the subsequent resolution of the narrator himself.  The poem contains a variety of different moods from the wonderful idyllic imagery in the first three stanzas, to the sinking into melancholy in the fourth and fifth stanzas, on to border-line despair in the seventh stanza, and finally through investigation to a hopeful resolution at the end.

I must admit, it took me a bit to digest this poem as the use of septets (7 line stanzas) and the royal rhyme pattern (ababbcc) made the first reading difficult for me.  Perhaps I was focusing too much on form rather than the story or messages being conveyed.

Upon my second reading, I found that I enjoyed the poem to a large degree.  My favorite parts were those that uplifted me.  First, the beautiful imagery in the first three stanzas:  I could hear the birds singing and feel the brightness of the sun.  The moist grass, the seemingly playful hares all set me in a light and joyful frame of mind.

I also particularly enjoyed stanzas fourteen, fifteen, eighteen, and nineteen where the old man is speaking and telling a portion of his tale.  For though he is old, of no fixed home, and toils at maintaining a meager subsistence he has a dignity and cheerfulness about him.  His words lead the narrator to the final stanza in which he resolves to remember the positive spirit of the old man when he himself sinks into melancholy thoughts.

The seventh stanza was poignant in pointing out how we can be in a positive setting yet become obsessed with ills that may befall us as Wordsworth discusses Chatterton, a promising English poet who died at 17.  (Sources conflict as to whether his death was due to arsenic poisoning as a suicide or an accident of self-medication for a venereal disease.  Yet another source indicates he may have died of self-starvation.)  At this point it seems the narrator fears his own demise into “despondency and madness.”

There were two specific references that I had trouble interpreting.  The first was the use of “He” in the sixth stanza.  I leaned toward interpreting it as a reference to God however following words in the stanza “him” and “himself” were not capitalized leading me to think that the reference is to someone other than God.  The second reference that eluded me was “grave Livers” in the fourteenth stanza.  After researching the term on the Internet I was no clearer on my understanding than at the start other than I perceive it to be used as a derogatory term.

Overall, once I adjusted to the rhythm of the poem and paid closer attention to the content I was struck by the wonderful descriptions in each verse, I could see the natural surroundings, visualize and hear the old man, and connect with the narrator’s thoughts.  It is a poem well worth reading and I recommend it for your enjoyment and reflection.