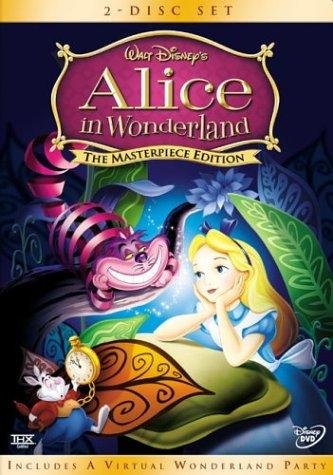 According to the Internet Movie Database (IMDb) Walt Disney released Alice in Wonderland in 1952. As with most Disney movies, this film featured many catchy jingles for many scenes throughout. After reading and watching the movie for the first time I unquestionably noticed a handful of similarities and differences.

The film by Disney is a combination of Lewis Carroll’s “The Adventures of Alice in Wonderland” and “Through the Looking-Glass”. Disney’s retelling introduces us to Alice she listens to her history lesson while playing with her cat, Darna, while in the book she is sitting next to her sister reading a book. Since this is a children’s movie, it’s possible that Disney incorporated the subject of History in an educative manner to interest their children viewers in history. Children often look up at Disney princesses and characters as role models. Perhaps introducing the subject of History would spark interest in children to be like Alice and take interest in History. In the film, Alice follows a white rabbit and falls through a rabbit hole. In the movie Alice lands directly in the hall of the doors. In the Lewis Carroll’s original book, Alice has to follow the rabbit in order to get to the miniature door. In the film, as typical for Disney (giving life to inanimate objects) the miniature door speaks to Alice telling her to take a potion to change in size from a table that magically appears. However, in the text “Alice in Wonderland”, the table is already in the scene and the potion has instructions for her to drink it. Accurate however, was the scene of the pool of tears. 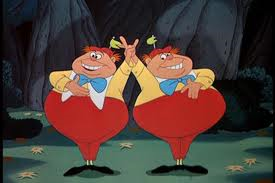 A major difference I spotted in the film was the appearance of Tweedle Dee and Tweedle Dum, characters that appear in Lewis Carroll’s Through the Looking-Glass. Most significant was Tweedle Dee’s and Tweedle Dum’s recitation of “You are old, Father William”, which Alice recites in the book to the Caterpillar. Their characters however were very well illustrated in the film as they were in the original text – obnoxious and annoying. The character of the Queen was also exact as the book, with the Queen screaming “off with his head” to resolve all issues.

In Disney’s movie, the Caterpillar (as in the text) sits on a large mushroom smoking hookah. In the film the Caterpillar transforms to a butterfly where in the book the Caterpillar did not transform; it was only insinuated as Alice only talked about how the Caterpillar would one day transform into a butterfly.One of my favorite scenes from both the film and the book was of the Mad Hatter’s tea party. In the film, the white rabbit appears with the recurring motif of the watch complaining about lateness and tardiness. The Mad Hatter takes it from the white rabbit and says that it’s defective. In an attempt to fix it he begins to smother it with jelly, tea, sugar and other items from their tea party. In Carroll’s original book, the Hatter takes out his watch and asks what time it is, the white rapper makes no appearance in this scene. After she leaves the tea party Alice gets lost in the woods and meets very odd creatures, another very Disney styled animation.One of the scenes I found to be exact as the book was of the cards painting the roses red. In the movie, the cards sing a jingle that tells why they’re painting the roses red – as is explained in the book. Alice chimes in, sings along and helps them.

As the movie came to an end, Alice was chased by all of the creatures until she reached the miniature door again. She peeped through the keyhole and saw herself asleep beside a tree. Disney illustrated Alice escaping wonderland waking up to reality and going in to drink tea as instructed by, who from the book we assume is her sister. The book also ends with Alice waking up from a dream, however in the book she wakes up to her sister instructing her to go in for some tea.

A few pieces from Carroll’s original book I found were completely omitted from the Disney movie were: the concept of the chess game, the scene of the queen and the pig, the Mock Turtle, the dormouse story from the tea party, the Gryphon, the Jabberwocky, and the Lobster Quadrille. I feel that these are scenes that Disney did not incorporate in their retelling because they were scenes that perhaps children would have trouble understanding.

Disney movies, especially the retelling of “Alice in Wonderland”, are marketed and geared towards the children audience. Their films feed to the child mind, and this retelling of Alice’s curious and imaginative world explored just that. It allowed for the child mind to explore and engage in Alice’s endless possibilities.