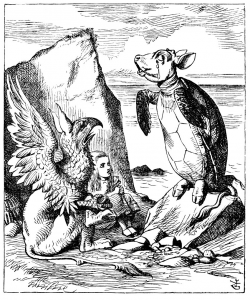 It has taken me 57 years to finally read Alice In Wonderland; if I had waited another 57 years to do so I would not have felt a loss.  Taken on face value without delving into the irony and parody the author may have intended, it reads like the mad wanderings of someone using too many hallucinogens.

Pick a passage, any passage, and you will find yourself thoroughly perplexed and asking, “What’s the point?”  Take for example the scene dealing with the history of the Mock Turtle, which is probably one of the more lucid scenes in the story.  The Queen of Hearts, literally a playing card with human qualities, tells Alice that she must hear the Mock Turtle’s history.  The Queen escorts Alice to a Gryphon, a creature with the head and wings of an eagle and the body of a lion, and directs the Gryphon to take Alice to see the turtle.

The history of Mock Turtle (who looks mostly like a turtle but appears to have the head, rear hooves, and tail of a calf) is sketchy at best.  This melancholy, tearful creature begins his story with the revelation that once, he was a real turtle.  He then continues on to tell Alice that when he was little he went to school in the sea.  He states, “The master was an old Turtle – we used to call him Tortoise,” at which point, Alice interrupts him to ask, “Why did you call him Tortoise, if he wasn’t one?”  To which Mock Turtle angrily replied, “We called him Tortoise because he taught us.  Really you are very dull!”  This exchange is in keeping with what seems to be an underlying theme throughout Alice’s time in Wonderland.  Alice is continually questioning or correcting the inhabitants of Wonderland based upon her perceptions, formed in her world, or her own faulty knowledge.  The implication being that Alice, or any of us, is often too ready to apply her standards to others when in fact, there may be more than one way of doing things and her way of seeing or doing may not be the only way.

The remainder of the chapter, and the beginning of the next, carry on in much the same way with Mock Turtle relating his school days and how to perform the Lobster-Quadrille (a dance).  Numerous plays on words ensue and the overall madness contained in Alice in Wonderland continues unabated.  Certainly there is a moral to this story if one chooses to look hard enough, for example: the need to keep an open mind regarding our perceptions as outlined in the paragraph above.  But, as a form of entertainment, I stand by my opening remarks.  Perhaps this story was considered entertaining fancy for the Victorian reader; if so, it has not stood the test of time.