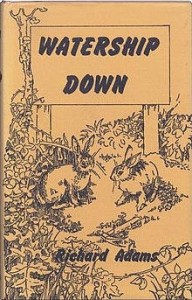 With so many choices it is hard to distinguish one particular book as being the favorite of them all so, I started at the beginning of the author alphabet and for the ‘A’s chose Watership Down by Richard Adams.  On the surface it is a story of a warren of male rabbits who move on to seek females rabbits to keep their line alive, a pleasant, if sometimes harrowing story based in the animal kingdom.  But, the story is much more than that as it examines the social pressures applicable to all times and peoples in one sense or another.  The story is told in such an engaging way that the animals gain a believable human persona and you find yourself rooting for the hero and his followers and hoping for the villains demise.  It is in some ways reminiscent of the “David and Goliath” scenario where you breathlessly hope for the underdog to come out on top.

Watership Down is a timeless story that can appeal to many generations from young to old.  As I many times as I have read it over the years, I find myself fully engaged in the trials and quest of the characters during each reading.  Whether you are looking to be entertained, learned, both, or somewhere in-between, Watership Down will satisfy your desires.

My mother always wanted for her children to read because she saw it as fundamental but also a way to better ourselves and not become a statistic. So I would find myself going to the library at school but also our public library in our city. I have read a variety of books overtime and must say that I  do not have a favorite book. So deciding which book to deem my favorite is pretty hard so instead I decided on a book that was life changing.

Double Dutch by Sharon M. Draper tells the story of Delia who has progressed to the 8th grade without knowing how to read. Some main factors that contribute to her not knowing how to read is her being in public school where it is easier to slip through the cracks and also her parents going through an ugly divorce. 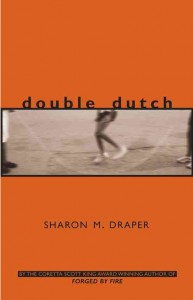 Then you have her friend Randy who is living on his own because his single father, who happens to be a trucker, who has not come home for a couple days and Randy starts to worry but is afraid to tell.

This story touches me because I understand how a child could be left behind especially in a public school setting. I am very fortunate to have a mother that made sure that I was learning everything I needed and to also have both parents in the home. This book has opened my eyes and makes me want to help. Maybe not by becoming a regular teacher but just being open to the ideal of finding a way to get through to the youth and being a resourceful person for anyone wanting to learn.