The reinterpretation I chose to research is the two part mini-series called Alice that that came out in 2009. In this version Alice is Alice Hamilton, a woman in her early 20’s who is a martial arts instructor living at home with her mom. She comes off as strong but emotionally cold due to her father disappearing ten years before. It starts with her having her boyfriend Jack over and becomes uncomfortable when he wants to give her a ring and asks her to come meet his family for the weekend. She declines both and he leaves but not before he slips the ring into her pocket.  When she goes after him to return it, sees him being thrown into a van and then is questioned by a white haired man who retrieves the ring from her. She chases him and he jumps into a large mirror in a dark alley.  She falls in the same mirror and is transported to a new world called Wonderland.

Wonderland looks like a futuristically bleak world typically seen in Sci-Fi movies. The special effects are well done for a TV mini-series and even has a Jaberwock that looks just like the one in the book.  The animal characters are mostly human in this version but have the same names as in the book. Some examples of these are the Dodo who is part of a group trying to overthrow the Queen, the Caterpillar a leader in that same group, the White Rabbit who works for the queen and Mad March, a robotic assassin with a rabbit for a head hired by the queen to kill The Hatter. The plot of this version is that the Resistance is trying to overthrow the Queen of Hearts who drains the emotions from people kidnapped from the regular world. She uses their emotions to help run the Queen of Hearts Casino. The ring Alice is given is very important and both groups are after because it controls the portal to Wonderland. 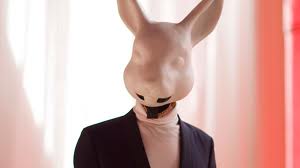 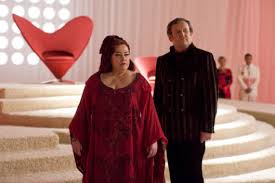 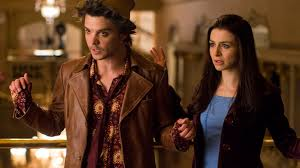 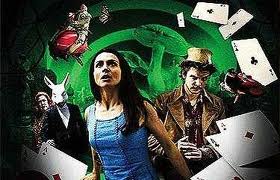 The reason why new versions of Alice are still being created is because the original is so beloved for its imagination and we’ve all grown up on the story. The direction intended for this version is a sci fi adventure with undertones of overcoming emotional traumas and leaving parts of your childhood behind. Due to that it lacked themes of identity and innocence that I thought the novel had. This version also differs because Alice and the Mad Hatter called just Hatter in this one connect romantically. Also most of the dialogue in the novel is found missing and was waiting for Caterpillar to say “Who are you?” to Alice which he did not. He did smoke out of a hookah though while floating in a pool in a canoe. They filmmakers continuously did try to remind viewers of the original such as having the Hatter own a tea shop. Overall this version proves that there will always be interest in the Alice novels, and look forward to a new reimagining.