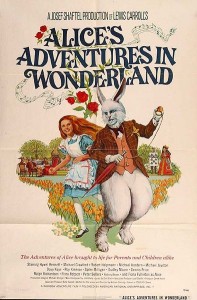 I was amazed to discover the plethora of movies made regarding Alice’s Adventures in Wonderland that either stuck fairly closely to the original story or incorporated elements of the Alice stories.  In addition to movies, there were also television shows, one of the more interesting ones was a short lived, Canadian courtroom drama entitled This is Wonderland with the lead character named Alice De Reay.  With so many interesting choices, it was difficult to decide where to focus my attention.  I chose to watch and report on the 1972 British musical film Alice’s Adventures in Wonderland.

This film stayed fairly close to Lewis Carroll’s original story with the major exception of incorporating the scene with Tweedledee and Tweedledum from Through the Looking Glass.  This scene was inserted after Alice’s conversation with the caterpillar and prior to arriving at the Duchess’s house for the pig and pepper scene.  The screenplay omitted some minor elements but, being a musical, expanded on others.  The verses used in the book that made it into the movie where converted to song, for example “Will you Walk a Little Faster, Said a Whiting to a Snail” featuring Mock Turtle, the Gryphon and Alice.

To see the clip, click on this link:  Will You, Won’t You Join the Dance…

In the book, Alice was seven years old; in the film, her age is indeterminate but she appears older.  Fiona Fullerton who was 16 years old when the film was originally released played Alice.  Because of the special effects of Alice shrinking and growing throughout, the only “give away” that she is older is the Lolita-like appearance of her face.

The costume designers did a wonderful job portraying the various Wonderland characters as close as possible to the characters drawn by John Tenniel in the first edition of the novel.  However, as with the book itself, I found the characters to be disturbing in their appearance. 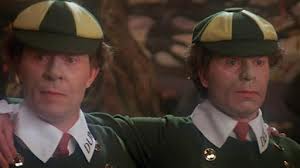 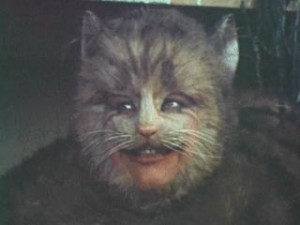 As mentioned earlier in this post, the film was fairly true to the book.  But, this is primarily in relation to the story line.  What was lost in the film was some of the exquisite word play used by Carroll throughout Alice.  None-the-less, the spirit and intent of the fantasy remains and, as a musical the addition to the Mad Hatter’s tea party was one of my favorites.  I think you will enjoy it as well, The Pun Song