Alice’s Adventures in Wonderland is a familiar story of a girl named Alice that falls down a rabbit hole and finds herself in a nonsensical fantasy world inhabited by many colorful and peculiar creatures. Ever since the book was published, there have been numerous adaptations made after it, among the most recent being the 2010 Disney film Alice in Wonderland directed by Tim Burton. The Disney film is loosely based on the popular novel as well as its sequel Through the Looking Glass. 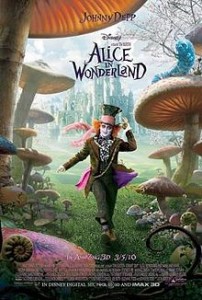 In this postmodern adaptation, a much older, fetching, independent nineteen-year-old Alice, who is troubled by nightmares of ‘Wonderland’ (or as Burton calls it, Underland) returns and embarks on a quest filled with adventure, humor, violence, and even terror. The obvious changes made to the story, combined with the distinct design of Burton, generated a great deal of controversy as critics accused that the version was too significantly untrue to the spirit of the original works. However, while his storyline and stylistic elements diverge from the original tale immensely, Burton addresses many of the same themes as Carroll, although in a different and unique vision/context.

Nevertheless, director Tim Burton makes it clear that this is intentionally a very different sort of Alice from that of Lewis Carroll’s Alice’s Adventures in Wonderland. For example, he primarily focuses on the characters and episodes from Carroll’s darker Through the Looking-Glass rather than the more upbeat Wonderland. Additionally, Burton adds his signature nightmare approach to the film. Rather than staying true to the original text, he uses significant characters borrowed from the Alice books to create an entirely new narrative (or it can be seen as a continuation of the Alice books).

In the film Burton explores the question: What if Alice returned to Wonderland when she was older? As a result, he addresses the struggle of identity, as well as place and meaning in the experience of growing up. The movie’s opening scene takes place at a social garden party, where Alice struggles against the expectations of society. She feels increasingly uncertain about who she is, as she is reshaped according to the wishes of others and is contemplating a marriage proposal to a pretentious, titled young man she does not love. 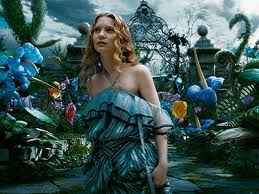 When she must make the decision as to whether she will become engaged to the ridiculous man, she sees the White Rabbit and runs after it. Alice falls down the rabbit hole, in one of the only scenes highly reminiscent of the book, and finds herself not in the bright Wonderland of her dreams, but in the twisted, barren world known as Underland. Thinking she is dreaming, she meets many of the familiar characters such as the Tweedles and the Mad Hatter, who inform her that it has been foretold that an ‘Alice’ will slay the Jabberwocky monster and free Underland from the cruel oppression of the Red Queen. Although initially insisting that she is not “that Alice,” (“You’ve brought us the wrong Alice,” complains the Dormouse; She seems to have lost her “muchness”) she finds herself on a rescue adventure to free the imprisoned Mad Hatter from the Red Queen’s castle, where she slowly becomes convinced that she must in fact be the “right Alice.” Finally, during a conversation with the Blue Caterpillar, named Absalom, Alice realizes that her supposed nightmares are actually memories of a childhood visit to Underland, and that she has returned for the purpose of slaying the Jabberwocky. At the conclusion of the film, a climactic battle scene follows, taking place on a chess board surrounded by the opposing card soldiers of the Red and White Queens (two sisters at odds for the rule of Underland). After slaying the monster and giving the rule of Underland back to the good White Queen, Alice returns to Victorian society a changed woman. She is no longer prepared to accept the life predetermined for her, but sets sail for China to expand her father’s trading company and find new adventures for herself. 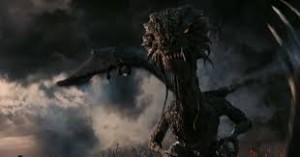 The Jabberwocky via IMDB

In Tim Burton’s 2010 adaptation, he attempts to offer a darker interpretation, where the riddles, rhymes, and childlike nonsense of Wonderland no longer exist. As such, Burton creates a the desolate and depressing world of Underland, highlighting only the negative undertones of the original stories. Burton’s inclusion of a great mission for Alice is completely absent from the books, and serves to construct a more cohesive narrative with a more clearly defined plot. Moreover, the Jabberwocky itself is only mentioned briefly in a poem in Through the Looking-Glass, while the presence of the Jabberwocky is central to the conflict and progression of the film. As a result, Burton establishes a clear struggle between good and evil that, while it helps the adult Alice mature into the strong young woman, seems disconnected from the nonsensical spirit of the novels. Related to this, Burton’s choice to heighten the evil in Underland deprives the story of its original innocence, creating a more adult world in which pain and suffering are fully acknowledged. Consequently, there appears to be an inverse relationship between Tim Burton’s Alice in Wonderland and Lewis Carroll’s Alice’s Adventures in Wonderland due to the overwhelming differences: the more you like the Alice books, the more you’re probably going to dislike Burton’s film adaptation.