The movie that I chose for my adaptation of Alice in Wonderland is Alice in Murderland. When watching Alice in Murderland, it includes more of Alice in Wonderland details versus it being a spinoff of the book. The main character is a young woman, who fits the Alice charter traits. Alice is blonde with blue eyes and a petite body type. The only difference between the two is Alice in the movie is twenty-one and Alice in the book is seven years old. 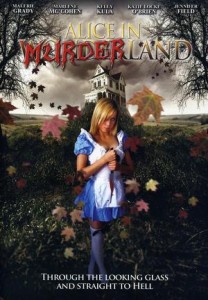 In the movie, Alice’s sorority sisters are throwing her a birthday party. Against their better judgment, they decide to throw it at a place called the glass house, which happens to be the same place Alices mother was killed twenty years ago. They also decide to make it an Alice in Wonderland themed party. They include characters such as twiddledee and twiddledum, which are reserved for the typical best friends of the group. Twiddledum, Donna, also happens to be the typical dumb blonde of the group and Twiddledee, Dee who watches over her like an older sister. Then they have Pima who is assigned to dress in a caterpillar outfit. Pima happens to also be the one girl of the group who always brings the drugs to the party. Her drug of choice is shrooms for the party. Similar to the book, the caterpillar tells Alice to eat mushrooms. Then they have a strong willed girl name Cat, who dresses up as the Cheshire Cat because she is sneaky and disappears from the group like the Cheshire Cat in the book. Alices best friend Malory dresses up as the white rabbit but does not have anything in common with the fictional character. The owner of the glass house who happens to be Malory’s uncle, Mr. White, dresses up as the Mad Hatter who also does not have much in common with his 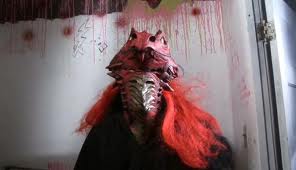 character either. Then you have Samantha who plays the cook. Then you have Tiffany who dresses up like the red queen or better known as the Queen of Hearts which can fit her domineering personality. They choose not to include a jabberwocky costume maybe because it has no part in the Alice in Wonderland book but that does not stop a jabberwocky appearing and killing most of the girls off anyway. 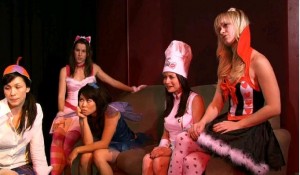 The girls get dressed up in their outfits at the glass house. Drama starts to breakout but is easily squashed. Alice suggests that we have a tea party such as the one in the book. Drama outbreaks again and the girls decide to split up. Alice, Cat and Malory decide to stay downstairs and have a tea party while the remaining girls go upstairs. Cat disappears and the other girls plot to rig the house with traps. Pima gives Dee some shrooms, which sends her on a bad trip that results her in choking one of the girls. Pima takes her to the bathroom and puts her in the shower hoping that would make her better. Dee then sees a jabberwocky in costume and Pima then turns around and runs. The jabberwocky then kills Dee and runs after Pima. Pima hides but is eventually killed. Meanwhile the girls have no clue and try to trick Malory and Alice leaving Cat alone to her own demise. Donna tries to find Dee but finds her dead. 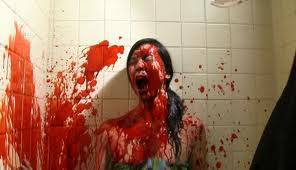 The Jabberwocky knocks her out and glues her butt to the toilet. The girls split up again trying to find a way out, something to help get Donna off the toilet and a cell phone. Mr. White helps pull Donna off the toilet while the Jabberwocky is about to kill them. Tiffany knocks the Jabberwocky out and it is revealed that Cat was the one in the costume all along. Soon everyone tries to find a way out and Tiffany and Samantha are assigned to watch Cat. During that time it is revealed that Samantha is Cat’s sister and lets Cat go free. They chop Tiffanys head off and go look for the other girls to kill. Samantha finds Alice but Alice ends up bashing her head in.  She finds Cat just about to kill Malory but she stabs her first. Right before Cat dies, she tells Alice that she will always be a killer until she breaths her last death. The end of the movie shows Alice is around her aunt and Malory and starts to laugh creepily after repeating what Cat told her right before her death.

The director, Dennis Devine, may have chosen the direction to draw in a young adult crowd. He may have also wanted the story in a modern day setting but also getting rid of the usual fantasy based premise. Devine turned a simple children’s book into a movie that surrounds drugs, killing and lying but he did include references from the book during the movie. If Alice in Wonderland would have been set in a realistic world then this adaptation would have not been so outlandish.

8 thoughts on “Alice in Murderland”