I started my experimentation with a copy of my section in Through the Looking Glass. My section is the first part of the chapter “Wool and Water“, which tells about Alice’s first encounter with the White Queen.
I decided to start with a word cloud. Before I limited the cloud and edited the list, “the” and “and” were the most common words shown. I then applied the Taporware list, and added the word “said” to it. For some reason, “said” is a very common word in this book (it makes sense when you consider that Alice is always talking). 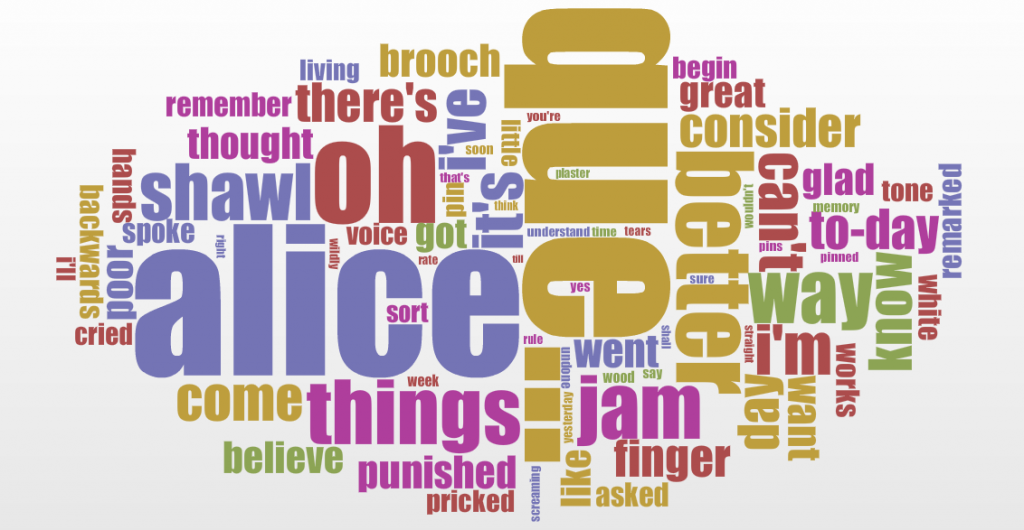 The two most common words on the list are “Alice” (30 times) and “Queen” (33 times). This makes sense if the word “said” also appeared a lot, since much of the passage uses these three words in conjunction with one another (i.e. “Alice said” or “said the Queen”). The word “oh” is the third most common (14 times), but the most intriguing result is that “better” is used 12 times within the passage.
Keywords in Context indicates that “better” is often used for hypothetical situations. Most of the uses are something to the effect of “it would have been better”, “it would be better” or “it wouldn’t be better”. 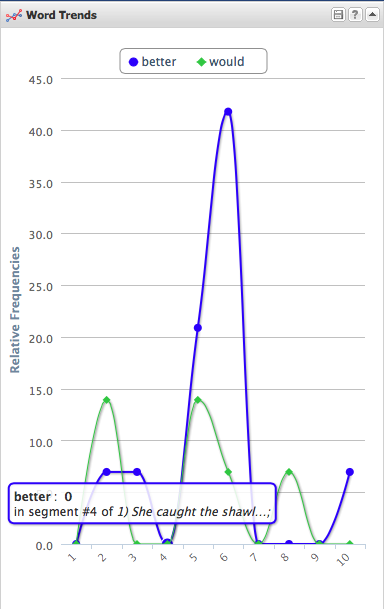 This trend seems to suggest that the passage focuses on possibilities. To determine whether this is the case, I used the word trends graph and took “would” off of the stop words list. The result shows that although “better” is more frequently used, “would” (only used 6 times) is often present in the same phrases.

Overall, this suggests that at least within this passage, Carroll is focused on hypothetical situations, and the White Queen uses them to challenge Alice’s previous conceptions about the world.
Using these tools would be helpful in a close reading analysis because they would point to larger trends within the text, and give the writer specific passages and phrases to point to when making their case.