Posted on September 25, 2018 by Teka Edwards-Deere 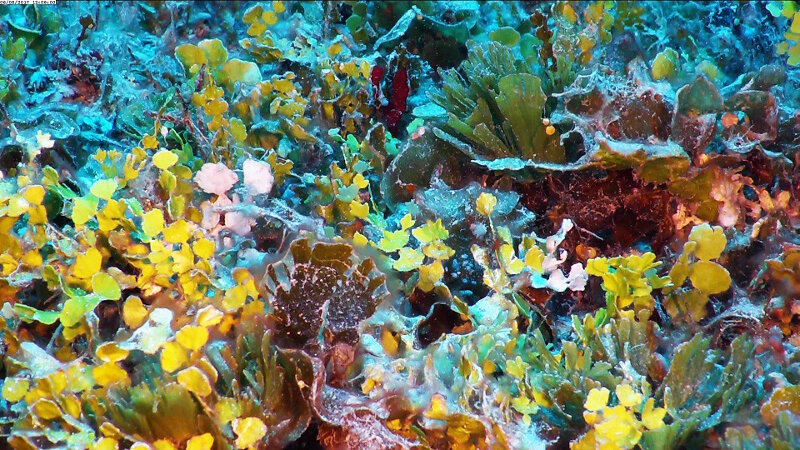 Calcified green algae are important to the biogeochemical cycles of coral reefs. In this garden of algae, we saw three species of Halimeda, as well as Udotea and Rhipocephalus. Image courtesy of Cuba’s Twilight Zone Reefs and Their Regional Connectivity. Download larger image (jpg, 332 KB).

In general, the zonation pattern of mesophotic algae in the eastern region of Cuba is similar to that found in the western region. In the deep zone between 75 to 150 meters, the crustose coralline algae (Rhodophyta) are predominant. Between 50 to 100 meters, the species of the calcified green alga Halimeda begin to appear, along with the brown alga Dictyota spp. and some other species. From 30 to 50 meters, we frequently observe high coverage of the brown alga Lobophora sp. Perhaps this is due to the low presence of herbivores (urchins and herbivorous fish) and the sedimentation coming from the nearby land. 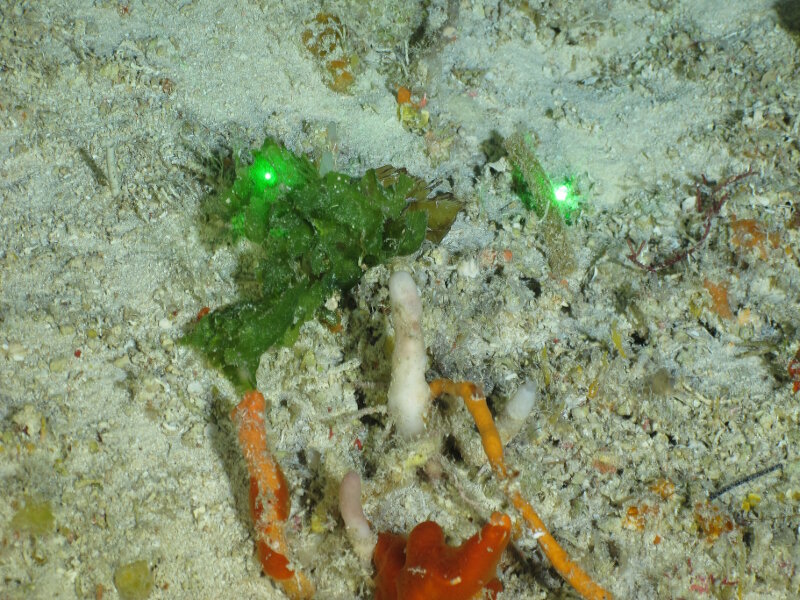 We found a new depth record for Anadyomene, 120 meters at Cayo Coco. This green alga has a conspicuous pattern of large cells that resemble veins in leaves. Image courtesy of Cuba’s Twilight Zone Reefs and Their Regional Connectivity. Download larger version (jpg, 1.1 MB).

In our remotely operated vehicle (ROV) dives at the Cayo Coco site of the Archipelago of Sabana-Camagüey, we observed a higer diversity of Halimeda spp. It is interesting to see how the patterns of distribution in these two groups of algae (Ochrophyta or brown algae, and Chlorophyta or green algae) seem to alternate in the shallow mesophotic zone at the two different sites we explored. I wonder why this happens, as both sites are in the same region of the island (Archipelago of Sabana-Camagüey).

Other interesting findings were observing species not common to the area, such as the brown alga Sporochnus pedunculatus at 45 meters deep in Cayo Sabinal (Archipelago of Sabana-Camagüey). We also found new depth records for species for the region, such as Udotea occidentalis found at 62 meters and a species of Anadyomene found at 120 meters in Cayo Coco. 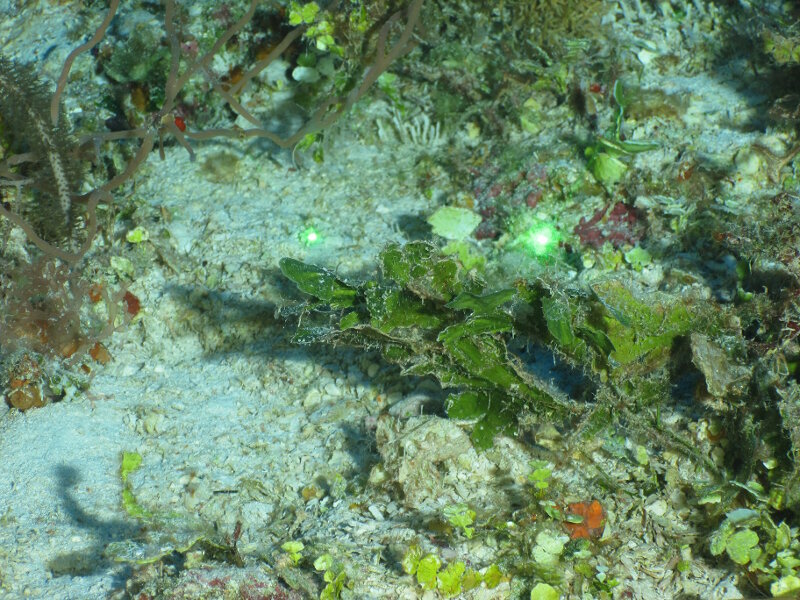 In our snokel surveys of shallow reefs, we observed algal diversity that was much higher than in the mesophotic zone, with species of genera such as Amphiroa, Sargassum, Turbinaria, Dictyota, Stypopodium, and Halimeda. This higher diversity could be due to the much greater ease of sampling in shallow water than with the ROV in deeper water. 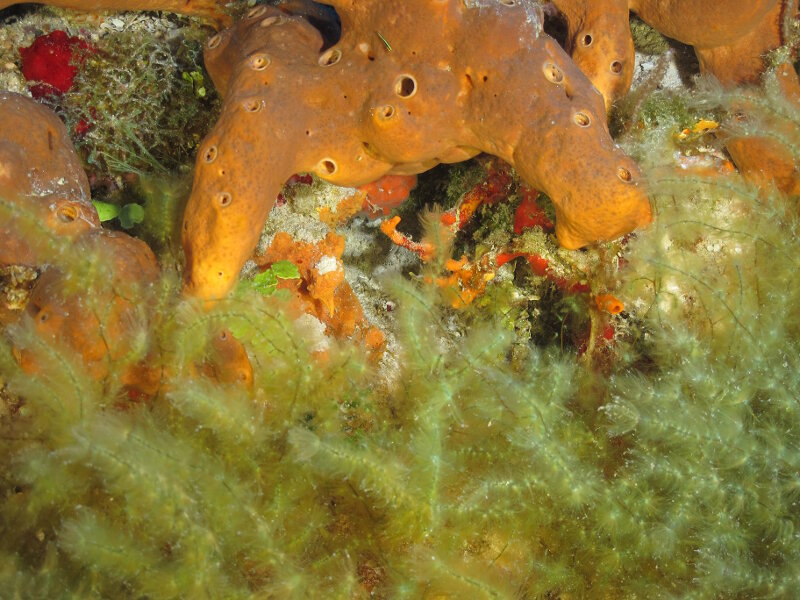 At Cayo Sabinal at 45 meters deep, we observed a nice population of Sporochnus pedunculatus, which has rarely been seen in Cuba, as this brown alga is limited to deep water. Image courtesy of Cuba’s Twilight Zone Reefs and Their Regional Connectivity. Download larger version (jpg, 804 KB).

One of us (Patricia) wishes to say that this opportunity to share with scientists from American academic insitutions and in particular with Dr. Dennis Hanisak has been incredible. He is very motivating and contagious at the same time his interest and passion for algae. I hope everyone who listens to him will be motivated to study the algae as we are. I thank you for participating in this expedition and am glad to have met all these wonderful people.

One of us (Dennis) wishes to say what a wonderful opportunity it has also been for me to come to Cuba and explore its mesophotic reef with Cuban experts. I especially enjoyed working with Patricia, who has her own passion for algae, enormous energy, and a strong inquisitive nature, and to Dr. Beatriz Martínez-Daranas, who was the phycologist on Leg 1 and gave both of us good guidance for our algal explorations.

We both think that this research cruise represents a significant advancement of our understanding of marine resources in both our countries. 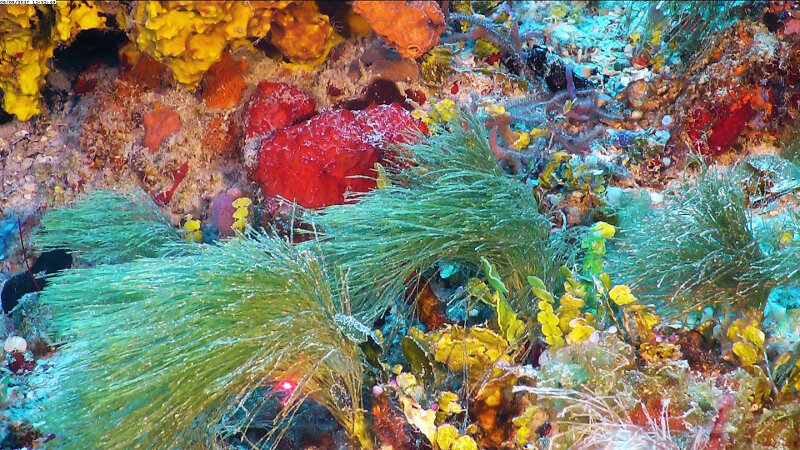 The green alga Penicillus dumetosus is an important calcifier and producer of fine sediments. Previously reported to have a very shallow depth range in Cuba, we found this species to depths of 53 meters. Image courtesy of Cuba’s Twilight Zone Reefs and Their Regional Connectivity. Download larger version (jpg, 343 KB). 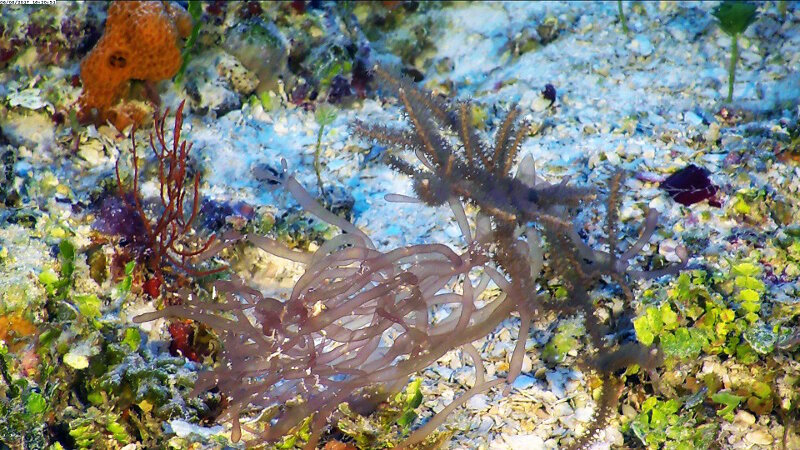 ← The Art of the Claw