Posted on September 11, 2018 by Teka Edwards-Deere

What we did we find?

The final week of our expedition has focused on mesophotic sites along the Northern coast of Cuba, from Punta Maisí on the eastern tip of Cuba to Havana. We expected conditions here to be some of the most challenging of the expedition given the proximity to more than 3,000-meter deep water and strong currents between Cuba and Haiti in the Windward Passage, as well as north of Cuba in the Bahama Chanel. However, we have been very pleasantly surprised with relatively calm conditions and currents of less than 0.5 knots during the majority of our operations. As a result, we have been able to conduct effective remotely operated vehicle (ROV) operations every day of this leg. Additionally, we have been able to snorkel and collect shallow 43 Montastraea cavernosa samples for our population connectivity studies at three sites along the northern coast. 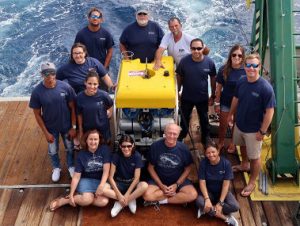 The sites on the north eastern coast of Cuba have displayed dramatic variability compared to those on the western side of the country. Sites near Punta Maisí and Punta Silencio were located in unprotected areas, which we expected to be vertical walls near steep canyons. However, instead these sites were characterized by 45° slopes from approximately 150 meters up to 75 meters. Diverse sponge and black coral communities were dominant below 75 meters. Some sites such as Cabo Lucrecia, also had 45-60° sloping rock walls, but were capped by extensive fields of Agaricia lettuce corals and thousands of shallow water gorgonians above 50 meters. Only one other location during our expedition, the Bahía de Cochinos (Bay of Pigs) marine protected area (MPA), demonstrated higher Agaricia abundance. Therefore, based on the extensive coral communities present at Cabo Lucrecia, this site represents an excellent opportunity for creation of a new MPA on Cuba’s northern coast.

The base of most sites below 150 meters was composed of sloping sediment plains with occasional rocky outcrops, but even in these deep barren areas, lionfish were observed. Lionfish distributions appeared to be generally clumped, with multiple individuals often sighted within five meters of one another. As voracious predators of many small fishes, including juvenile groupers and snappers, the impacts of this biological invasion on fisheries resources should be investigated, as the effects may vary significantly by site.

Grouper and snapper species abundance were also highly variable, and some sites with jagged, rugose structure and dense benthic biota were relatively devoid of larger reef dwelling species. However, other sites boasted amazing fish abundance. For example, multiple grouper species were abundant and a large aggregation of dog snapper (Lutjanus jocu) was observed just off Cayo Coco. Expansion of the existing MPA at Centro Oeste (Central West) Cayo Coco to encompass these areas may be an effective management strategy for conserving these important fisheries resources. 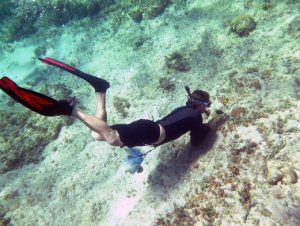 Another outstanding mesophotic reef we surveyed near Cayo Jutía lies just beyond the current boundaries of a faunal refugia MPA, Lanzanillo-Pajonal-Fragoso. A vertical rock wall from 140 meters to 40 meters with many heavily eroded faces provides extensive fish habitat. While Madracis corals were abundant near the base of the wall, numerous Agaricia lettuce corals covered the top of the wall near 40 meters.

In the shallow water MPA zone above our ROV dive site, beautiful extensive fields of Acropora cervicornis (staghorn coral) and stands of Acropora palmata (elkhorn coral) surrounded a small exposed islet on the reef crest. Evidence of fishing along the deep boundary near the existing MPA included snagged fishing/anchor lines, a large ~10-meter fishing net that was observed fouled on the wall at approximately 70 meters, and the presence of small fish vessels during our operations. Lanzanillo-Pajonal-Fragoso MPA represents another location where expansion of the existing boundaries should be strongly considered. 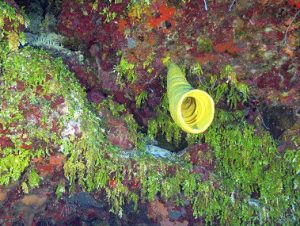