Posted by Kimberly Weisman on Friday, December 16, 2016 · Leave a Comment 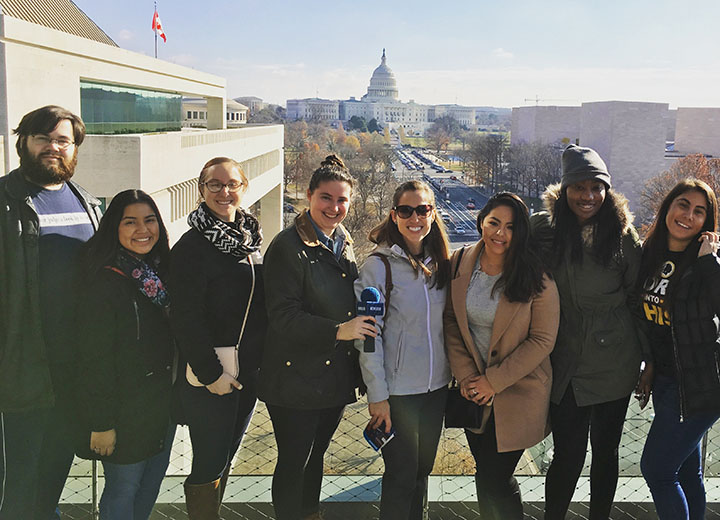 On December 7, 2016, the Broadcast Writing and Delivery class, taught by Dr. McFarlane, visited the Newseum in Washington, DC. In addition to viewing the exhibits, the students practiced their broadcasting skills using the teleprompter and and blue screen in the Newseum’s NBC News Interactive Newsroom.

“Taking a class trip to the Newseum was a very awesome experience because it related a lot with the content of what I have been learning. I think one of the best parts of the Newseum is on the 6th floor where there is a hallway filled with cover pages of newspapers around the country and world. It’s crazy to think that there is always new “news” happening everyday worldwide and because we live in the United States we are not aware of what happens on the other side of the world. But going into this part of the Newseum we get to see over 20 headlines and news of different states and countries around the world, and take it all in and see what is happening.” — Erika Mendoza, MU student

“The Newseum was a great place to get that experience of being a news anchor by reading from the teleprompters and being on camera at the same time. Another great part of the Newseum was how we got to see how TV and radio had changed over time. The technology that was used in TV and radio does not compare to the technology that we have now, and sometimes makes me wonder how it was like to live during the time where TV and radio were being developed, and what is was like before the major technological advancements.” — Erika Mendoza, MU student 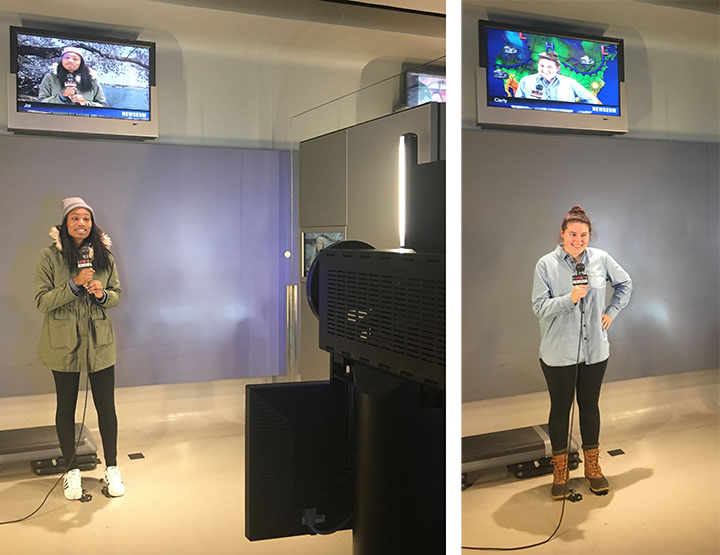 “The Interactive Newsroom has a useful feature named “Be a TV Reporter.” There, visitors can stand in front of different video backdrops, and choose a news topic to read from a teleprompter. The reader can then view himself or herself as a reporter in real time. I chose the weather report, but others chose the options of sports, stories about Newseum exhibits, and other current events. It was interesting but awkward to see and hear yourself on TV.” — Carly Blancato, MU student

“Waking up out of bed at 7:30 am on one of my off days wasn’t so bad because we were going on a field trip. Of course I knew the field trip would be fun because I’m in class with some of my closest friends and in my favorite class of the semester. I soon realized that going to the Newseum could turn into an all day affair. I know this may sound nerdy but I was so intrigued by the newspaper wall of all the front pages around the world. I don’t know if I was more impressed with all the paper and time that took or how the newspapers look across the world. The teleprompter exercise was fun but challenging at the same time. I didn’t know how fast the words on the screen would move. I give the credit to the news anchor that have to read those and do it with ease.”
— Joi Johnson, MU student