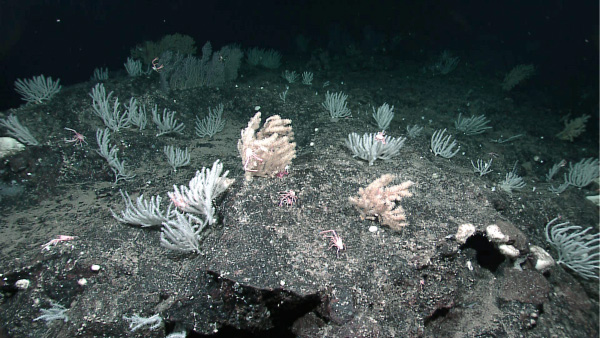 We are diving at ~800m. The ROV Little Herc is moving upslope and exploring the rim of the feature, which probably used to be an island shore a long time ago, before resuming movement towards the summit. Upslope, there is an increase in abundance (number of species per unit area) of organisms, and there is a general trend of high abundance of corals, but with low diversity–that is, we are encountering lots of the same species.  There is a clear difference in the types of species colonizing the summit margin, compared to lower depths, which are separated by a flat area. The summit margin can be characterized by a high abundance of white brachiopods (these shelled organisms look superficially like clams, but are actually not at all related) and pink brittle stars. The rocks are a puzzling red color, which prompts several hypotheses about their origin. One hypothesis from shore-side scientists is that the rocks are actually fossil shallow-water corals that were formed during a period at which the seamount was above or near the sea surface.

← Points of Light
Skip to toolbar