Our own Modern Atlantis 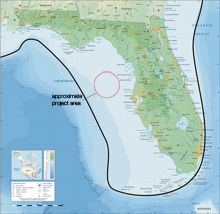 While we are exploring the submerged new world, we  investigate underwater landscapes that haven’t been touched by human activities for thousands of years.

The logic for this mission follows this: during the last Ice Age, climate change caused ocean levels to significantly decrease. The exposed land of Florida’s peninsula was much greater than it is today. For food supplies, early inhabitants were prone to coastal habitation. Small evidence has been uncovered suggesting that artifacts exist in this late Pleistocene, but now submerged, landscape.

Three shallower sites have bedrock exposed on the seafloor forming one side of the buried channel. The bedrock is low grade knappable (breakable or cut-able) toolstone that could have been used for tool making. The deepest site, Thor’s Elbow, is the intersection of the ancient Suwannee and another river, where we find more knappable bedrock buried under the modern surface. 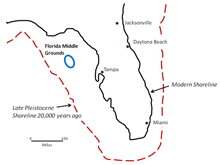 During the Late Pleistocene, Florida’s shoreline extended much farther offshore than does the present coast. Exploring the Submerged New World 2011 Expedition, NOAA-OER.

From Pleistocene Coast to Classroom
In 2011, our mission scientists hope to uncover the “needles” at these identified zones.  Finding these underwater artifacts, however, has been likened to “finding a needle in a haystack.”

Previous missions in 2008 and 2009 identified likely spots in this vast underwater landscape by mapping the intersection of the Ice Age coastline and ancient drowned river beds flowing from Florida, in an area known as the Florida Middle Grounds. 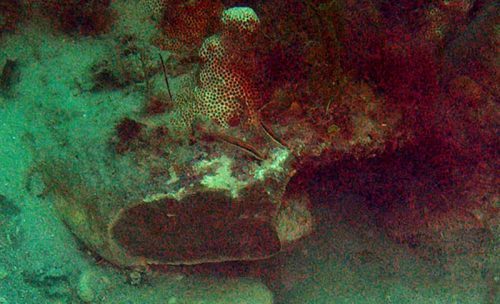 The Gameplan
At each of these sites we hope to locate prehistoric human-made artifacts; bones of Pleistocene animals, such as the mastodon; and perhaps datable organic material, such as pieces of wood. Any such finds would indicate that the now inundated Pleistocene landscape of Florida in the Gulf of Mexico is still preserved, accessible to archaeologists, and contains prehistoric evidence of the use of this landscape by people and animals alive at the end of the last Ice Age.

← Hercules Under the Sea
Ghostly Relics →
Skip to toolbar