Last November, we aimed to shed light on the Mariana back-arc, expecting it to be teeming with activity and life. Partnering up with Principal investigator Joseph Resting of the University of Washington, we led a team of researchers from University of Washington, Oregon State University, and NOAA/PMEL, over the course of the 27-day mission at sea. Our goal was to explore the black-arc spreading center to find new sites of hydrothermal activity and to better understand the physical, chemical, and geological foresees that shape biodiversity in these unique ecosystems 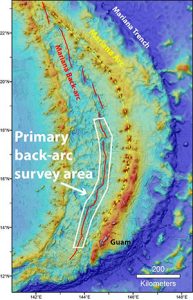 “Chemosynthesis” refers to organisms that transform carbon dioxide into organic matter in the same manner as plants, but, instead of using the energy from sunlight to do this — as in photosynthesis — we useing chemical energy instead, mostly from hydrogen, methane, hydrogen sulfide, and iron. Chemosynthetic ecosystems, like the Mariana Back-arc, exist in locations on the seafloor where chemical energy is present from seafloor hot springs, cold seeps, or other microbiological processes.

Our Mariana subduction system offers living organisms a range of conditions unlike any other region on the planet. To the west of the trench in the Mariana Back-arc, is a zone of spreading, where mantle magma wells up and new ocean crust is formed. This tectonic environment creates different geophysical and geochemical conditions for the chemosynthetic organisms, reflecting diversity in biological communities on the seafloor.