We at The Mariana region, famed for boasting the deepest spot on the planet, is also home to the Mariana subduction system. This mash-up of tectonic plates includes a wide range of geological settings and marine habitats, including a very deep trench, a shallow volcanic arc, and a mid-depth back-arc spreading center.  This great diversity of settings and habitats makes the Marianas a valuable natural laboratory for testing ideas about the distribution of animal species within hydrothermal vent ecosystems.

In our the Mariana region, only the volcanic arc has been systematically explored for hydrothermal vents, resulting in the discovery of 20 hydrothermally active seamounts and over 20 new species. These remarkable discoveries directly inspired the establishment by our Marianas Trench Marine National Monument in 2009.In contrast, more than 1000 kilometers of the Mariana back-arc remains almost completely unexplored. 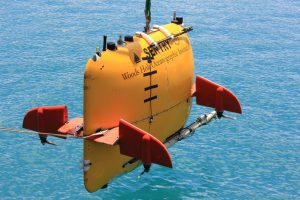 The research from this cruise helped test the idea that arc and back-arc sites have distinct ecosystems, controlled by each settings’ geology and unique fluid chemistry. In order to test this hypothesis, several tasks had to be accomplished. The science team began by finding and identifying active vent sites along the Mariana back-arc, and characterizing each site by its depth, geologic setting, temperature, chemical composition, and rise heights of hydrothermal plumes. During a follow-up expedition in 2016, the scientists will return with a remotely operated vehicle (ROV) to visually explore and sample the new vent sites on the seafloor.

← Explorers
HYDROTHERMAL HUNT: FROM ‘WOW!’ TO ‘WHY?’ →
Skip to toolbar