The Challenges of Continued Research… 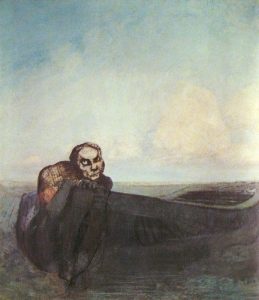 “The Angel of Destiny” by Odilon Redon

On close inspection, all literature is probably a version of the apocalypse that seems to me rooted, no matter what its socio-historical conditions might be, on the fragile border (borderline cases) where identities (subject/object, etc.) do not exist or only barely so—double, fuzzy, heterogeneous, animal, metamorphosed, altered, abject.

To bestow, find, reveal, or earn a name; to take away, hide, or prohibit a name…such acts are the means and ends of the characters in fiction, and as such lay bare a novel’s deepest levels of plot.

In continuing to develop my project over the past few weeks, I have found myself at both a literal and figurative impasse: I am still grappling with and exploring the fundamental (foundational?) question of why Mary Shelley chose to leave the creature in Frankenstein nameless. I have realized, however, that my attention has been misplaced, and should instead be on the effect that the creature’s namelessness has on our reading of the text.

Ironically, my recent research has caused me to (at least initially) widen the scope of my focus, which on one hand has been a bit overwhelming, but on the other hand, has allowed me to more precisely tease out my research question. My recent readings have included several new articles and book chapters (see additional sources below) on Julia Kristeva’s concept of the “abject,” the issue of naming in literature, gothic literature as a genre, and lastly, the specificity of the “female gothic.”

With those topics in mind, the following briefly summarizes my current thoughts about the question of naming (or not-naming) in Frankenstein. Specifically, the creature’s lack of a name serves two purposes:

1) It situates him as “illegitimate” within the text, both in the literal sense of his parentage and in the figurative sense of his relationship to society.

2) It positions his character as a gothic double for Victor Frankenstein.

I am still working on developing the latter, but this mirroring/doubling can be seen not only in Victor’s and the creature’s relationships with each other, but through their interactions with other characters, and with their respective actions throughout the novel. However, both possibilities refer back to the ontological paradox of whether something can have an identity if it does not have (or rather is denied) a name, which ties into the portion of my project that focuses on the issue of TEI and name coding a character.

In addition to the supplemental theoretical reading and research that I am doing, I’m also currently reading the 1831 edition of the text, in particular with an eye on comparing Shelley’s descriptions of the creature with those that she made in the 1818 text. While I have found much that has been written on the differences between the two texts (largely, on the characters of Elizabeth Lavenza, Victor Frankenstein, and Henry Clerval, as well as on the biographical events in Mary Shelley’s life that largely informed her revisions to the latter edition), I have yet to come across anything that examines the ways in which the portrayal of the creature changes (or does not change) from the earlier to later text. I am also currently using Juxta to assist with this close textual reading and comparison, but may also use the Keywords in Context tool in Voyant to help with this as well (I’ve been experimenting with both to see which would better suit my purposes).

My plan is to be done with my research this weekend and begin drafting my project immediately afterwards. My outline will follow in my next blog post!  (546)

“Abjection in Literature.” Abjection and Representation: an Exploration of Abjection in the Visual Arts, Film and Literature, by Rina Arya, Palgrave Macmillan, 2014, pp. 156–188.

Kilgour, Maggie. The Rise of the Gothic Novel. Routledge, 1995.

This entry was posted in Uncategorized and tagged 571. Bookmark the permalink.