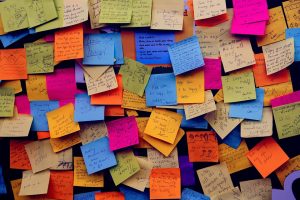 (While I was referring to the Faberge Organics shampoo commercial from the ’80’s, this Wayne’s World parody is even more apropos…)

Thinking back to my earliest memories of formal writing, I wrote all of my drafts in high school on a typewriter. Once the pages were typed out, I would take scissors to them and cut them into sections, paragraphs or even smaller segments. I would then spread them out on the floor and start to arrange them like a jigsaw puzzle. That was my favorite part of the writing process: organizing and reorganizing the sections in various ways until somehow they began to fit together in a logical flow. Once I was fairly satisfied with the result, I would then type another draft using the “Franken-draft” that I had taped together, adding introductory phrases and transitions as I went to “sew” these segments together.

As a college student, I did a semester abroad in England and was absolutely shocked to find that they did not have computers, or even typewriters, available for students to use. My instructor (“tutor”) informed me that we were to legibly hand write our essays each week in blue or black ink. I cannot count the number of pages that I had to re-write due to errors that I made as I was copying and recopying these essays. I felt that I had literally traveled back in time, and it gave me a much greater appreciation for writers who wrote prior to the advent of the typewriter.

A few months ago I read John McPhee’s collection of his creative non-fiction entitled Draft No. 4: On the Writing Process. In the chapter on structure, he talks about the transformation that he made in the early 1980s from typing his notes for magazine articles to using a computer program called “Kedit” that was not a word processor, but rather a combination “text editor” and data organizer. According to McPhee, the program “did not paginate, italicize, approve of spelling, or screw around with headers, wysiwygs, thesauruses, dictionaries, footnotes, or Sanskrit fonts”(36). It was bare bones, but McPhee used that basic program for over two decades.

When I was teaching writing on the Community College level, I encouraged my students to use Google Docs – both because of the collaborative nature of it, but more importantly, because the program was free. It may not be as robust as the MS Office Suite, but students can do a great deal with it nonetheless. In looking at other word processing programs that we were asked to examine this week, the only one that I was not familiar with was Scrivener. Unlike Google Docs or Word (which is my preferred program for personal use), it seems that Scrivener might closely approximate my former style of drafting, writing, organizing, and editing in terms of its ability to move around whole sections of text. I am only just starting to learn what the program can do, but I am drawn to the fact that it can be shared among multiple platforms, be it a computer, smart phone, or tablet. Unlike Google Docs, which is free, there is a nominal fee for Scrivener. Even so, at $38.25 for an educational license, it is a fraction of the cost of Microsoft Word. I can see encouraging my students to download the free 30-day trial to experiment with it. That is precisely what I am going to do this week. (630)

This entry was posted in Uncategorized and tagged 571. Bookmark the permalink.