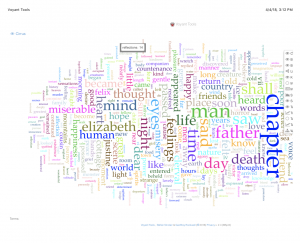 This proposal would be an outline for understanding and analyzing the Romantic trends Mary Shelley incorporates in Frankenstein through technological tools. Through technology, analyzing novels becomes easier and more efficient. It is a new method to studying novels in literature courses, whereas the “old” method requires intense, close readings to find key words and themes in the text. Instead, I will be reading digital texts and novels and analyzing them through a program called Voyant Tools. Voyant Tools is a web-based text reading and analysis program. It is a program that is designed to make reading and interpretive practices easier for humanities students and the general public. The program allows me to find key terms and themes simply by typing what I want to find in the search bar. This is a quick and efficient way to closely read texts. This method of close reading for digital texts through Voyant Tools allows me to study the Romantic ideas in Frankenstein.

Romanticism was an intellectual movement that was born from opposition to Enlightenment views that emphasized reason, knowledge, and science. In contrast, Romanticism focused on feelings, love, and imagination. One key example of a romantic literary work is the novel Frankenstein, written by Mary Shelley. 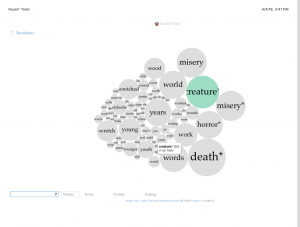 Mary Shelley wrote Frankenstein in 1818, which became her most famous work that embodied Romanticism. Victor Frankenstein, the main character, is a romantic character because he represents the Romantic ideals of imagination and innovation. Other examples of Romanticism in the novel appear when Shelley incorporates vivid imagery of nature. Throughout the novel, Shelley describes the awesomeness of nature. The feelings of Shelley’s characters often copy the state of nature around them. For example, the icy descriptions of the land where Walton goes to and where the monster retreats emphasizes the monster’s loneliness. The dreary landscape can also mirror the isolation that Walton felt when he traveled into this cold land in the beginning of the book. Another example is the scene where Victor wakes up with regret after creating his monster. He reflects that the morning is “dismal and wet” (Shelley) and he begins to fear his own creation. Shelley repeats this theme where weather conditions are similar to Victor’s feelings and thoughts. These descriptions of nature, parallel to a number of emotions that are expressed by the characters, help solidify Frankenstein as one of the greatest Romantic novel of its time.

In Voyant Tools, the “trends chart” shows the frequency of the words ‘horror’ and ‘creature’ in the novel. They fluctuate simultaneously as parallel themes throughout the novel, which shows that the words must be related in that horror is caused by the creature. However, the creature is more horrified than Victor Frankenstein himself. Through close readings in the “Key words in context” tool, of the novel shows through keywords in the context tool in Voyant Tools, the creature is shown to be more horrified than Victor himself. This close reading proves that there is a difference between the words found in context and the words graphed on the trend chart. In Frankenstein corpus, the “Terms Berry” tool shows common words such as wild, wood, and the sea. I misinterpreted the word “wild” in the novel because I thought it was associated with the description of the creature, when in fact, the “Key words in Context” tool showed that wild described the landscape of Frankenstein. Trends may misrepresent the Romanticism imagery in the trends graph, however it is impossible to go wrong with understanding the meaning of words, such as wild, because they are explicitly stated in the text.Voyant Tools-horror, creatures

The combination of technology and digital tools in studying the language in Frankenstein improved the efficiency of my analysis of the novel. Through Voyant Tools, I was able to easily identify key terms and locate trends throughout the novel that embodied Romanticism.