For centuries, philosophers have grappled with the ontological issue of what it means to be human. In her seminal novel, Frankenstein, Mary Shelley examines and challenges this very question. Shelley’s protagonist, Victor Frankenstein, endeavors to artificially create life, however, at the very moment of animation, he vehemently rejects his creation. Instead of being elated by his success, he is immediately repulsed by the “demoniacal corpse.” His rejection of the creature at that moment, which is continued throughout the remainder of the novel, functions as the catalyst for the creature’s subsequent violent and murderous actions. 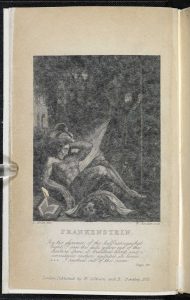 Frontispiece of the 1831 edition of “Frankenstein; or, the Modern Prometheus” (British Library)

Much like both the creature’s fragmented body and the novel’s corresponding narrative bricolage, my project consists of multiple parts. The first part will focus on Shelley’s textual descriptions of the creature in the 1818 edition of the novel. I will examine how her decision to leave this character unnamed, instead referring to him throughout the text by various sub-human descriptors such as “dæmon,” “animal,” and “fiend,” reinforces the binary division between human and nonhuman.

The second part of my project will focus on how Shelley’s literary treatment of the creature evolved between the 1818 edition and the later 1831 published text. While I recognize that this type of a comparison could potentially expand to a much larger project, I plan to narrowly focus my examination on Shelley’s descriptions of the creature by conducting a variant analysis of the two texts using Juxta Commons. For my witnesses, I will use the existing online texts of the 1818 and 1831 editions edited by Stuart Curran.

The third and final part of my project will conclude by further exploring the binary distinction that Shelley created between human and non-human, but will be situated in the larger realm of digital humanities. Specifically, I plan to examine the challenge that “naming the unnameable” creates when attempting to code the character of Frankenstein’s monster in a current digitization project.

While the scholarly body of work on Frankenstein is expansive, both in terms of the depth and breadth of previous academic explorations, based on the research that I have done thus far, I have not found any similar projects with my specific focus (though I hope that as I continue to work on this project, I will find some other examples on which to base or model my work). The two primary questions that I plan to explore in my final project are:  What issues arise by the naming, or not naming, of the creature, both in terms of computer programming and in literary analysis? What does that tell us about how we as readers and as scholars make the distinction between human and the ‘other’?

“Articulating the Abstract: Theories of the Unnameable.” The Unnameable Monster in Literature and Film, by Maria Beville. Routledge, 2013, pp. 51–69.

4 thoughts on ““The Nameless Mode of Naming the Unnameable”: (Un)coding the Non-human in Mary Shelley’s Frankenstein”