The hardest part of using graphs is figuring out how the data correlates and whether it is effective in providing literary relief, especially when the text is too complex. Laura Mandell references Robert Southey’s letters as the prime example in creating data sets for identifying the narrative and auditory voice(s). Relate seems effective especially because it projects letter writing onto a social media output. It appeals to the modern audience who may not be familiar or aware that how we communicate today is similar to writing letters, though it is more efficient and easier to get an immediate response. Mandell implies that Robert Southey writes 877 letters in the span of twelve years; trying to work through each letter to identify particular themes or styles may not be an easy task. However, graphing Southey’s letters as though it were a social network allows the reader to better mediate the connections between the people he writes on. 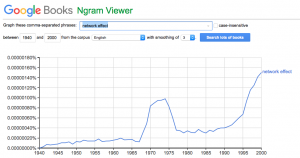 Information Visualization is prevalent for the Romantic era because of how it functions in discipline. Even just the ability to search key words and see the use of it over time provides a better understanding of how prevalent it is. I think that the reason people are hesitant to delve into Information Visualization is that they expect it to provide detailed information; however, as Mandell mentions in her article, it is meant to present “representations of abstract data.”

An exercise that can incorporate well into Frankenstein is a heat map of the different settings and how often they switch. Comparing it to Mary Shelley and her travels would be interesting, as she is interested and influenced by the environments around her. Although the reader may want more detailed information, the heat map would at least provide a foundation for readers to further research why Shelley focuses on a particular part of Europe more than others.

With the Ngram Viewer, I was able to broadly look at texts referenced in Frankenstein such as Paradise Lost. Having never read the text before, it helped set some ground in the use of Paradise Lost in other texts without the prerequisite of having to be an expert on it. For broad use, I believe that Information Visualization seems difficult, but only if the user is expecting more than abstraction.

3 thoughts on “Visualizing Words: Who said What?”